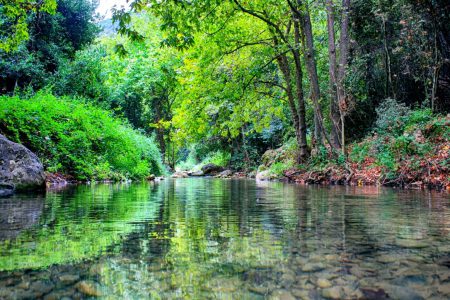 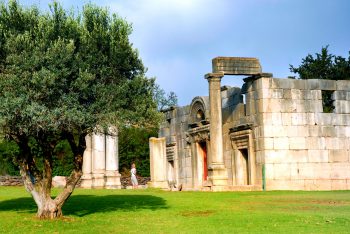 Most of Galilee consists of rocky terrain, at heights of between 500 and 700 m. Several high mountains are in the region, including Mount Tabor and Mount Meron, which have relatively low temperatures and high rainfall. As a result of this climate, flora and fauna thrive in the region, while many birds annually migrate from colder climates to Africa and back through the Hula–Jordan corridor. The streams and waterfalls, the latter mainly in Upper Galilee, along with vast fields of greenery and colorful wildflowers, as well as numerous towns of biblical importance, make the region a popular tourist destination.

Due to its high rainfall, mild temperatures and high mountains, the upper Galilee region contains some distinctive flora and fauna. Such as Lebanese cedar  which grows in a small grove on Mount Meron. Some of the most captivating landscapes and hiking trails are to be found in the Galilee Region. Like Nahal Kziv trail and Amud Stream, both hikes are relatively easy trails and super fun to do. 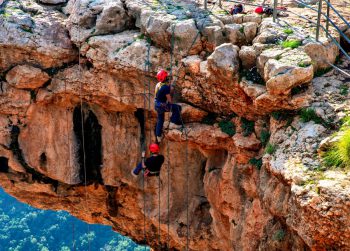 The human settlement in the Galilee goes way back. There is ample evidence of settlement in the Galilee as early as the Stone Age in caves and open-air sites. One of the earliest archeological sites in Israel is the Evron quarry near Kibbutz Evron. At this site elephant bones and other extinct animals were discovered along with stone tools typical of the Acheulean Culture, dated to about a million years before our time.

Neanderthal man and modern man (Homo sapiens). Neanderthal tombs were discovered in Amud Cave, along with the remains of hewn flint tools, animal bones and the remains of bonfires from about 55,000 years ago were found as well.

The Galilee in the first century was dotted with small towns and villages. The Jewish historian Josephus claims that there were 204 small towns in Galilee. Many of these towns were located around the Sea of Galilee, which contained many edible fish and which was surrounded by fertile land. Salted, dried, and pickled fish were an important export good. In 4 BCE, a rebel named Judah plundered Galilee’s largest city, Sepphoris. According to Josephus, the Syrian governor responded by sacking Sepphoris and selling the population into slavery, but the region’s archaeology lacks evidence of such destruction.

ANCIENT SYNAGOGUES IN THE GALILEE

To date, about one hundred and thirty ancient synagogues have been discovered in the Land of Israel, dating to the first century CE to the Middle Ages. Archaeological discoveries revealed the existence of synagogues in the country during the Second Temple period.

In the ancient synagogues, magnificent mosaic floors, dedication inscriptions in Hebrew, Aramaic and Greek were unearthed. As well as decorations of Jewish symbols, such as the seven-branched lamp, shofar, incense pan and the four species, were often found.

The synagogue at Baram belongs to the group of “Galilee synagogues” These synagogues are special in a large and has magnificent basilica structure and with a relatively modest interior. The building will usually have three main entrances. Similar buildings exist in Meron and Gush Halav.

Until recent years, these synagogues have been dated to the beginning of the third century CE (one of the earliest in the country). Today, following new research (see Mordechai Aviam’s study), it was found that synagogues were built around the fourth / fifth century CE.

When touring the Galilee you can find these ancient synagogues all over the region. Some of them are quite impressive and I recommend visiting at least one of them if you get the chance. 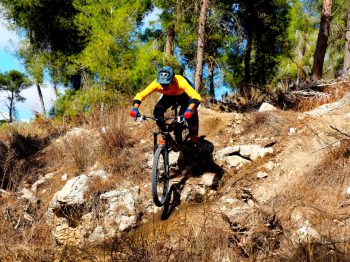