Tel Aviv is known as the ‘city that rose from the sand’. The city was founded in 1909 by the Yishuv (Jewish residents of then Palestine) as a modern housing estate on the outskirts of the ancient port city of Jaffa. It was at first called ‘Ahuzat Bayit’ (lit. “House Estate” or “Homestead”), the name of the association which established the neighborhood. Its name was changed the following year to ‘Tel Aviv’, after the biblical name Tel Abib adopted by Nahum Sokolow as the title for his Hebrew translation of Theodor Herzl’s 1902 novel ‘Altneuland’ (“Old New Land”). Aviv is Hebrew for “spring”, symbolizing renewal, and tel is an artificial mound created over centuries through the accumulation of successive layers of civilization built one over the other and symbolizing the ancient.

Other Jewish suburbs of Jaffa were established before Jaffa eventually became part of Tel Aviv, the oldest among them being is the neighborhood of Neve Tzedek (est. 1886). The walled city of Jaffa was the only urban center in the general area where now Tel Aviv is located in early modern times. Jaffa was an important port city in the region for millennia.

By the time Tel Aviv was founded as a separate city during Ottoman rule of the region, Jaffa had been ruled by the Canaanites, Egyptians, Philistines, Israelites, Assyrians, Babylonians, Persians, Phoenicians, Ptolemies, Seleucids, Hasmoneans, Romans, Byzantines, the early Islamic caliphates, Crusaders, Ayyubids, and Mamluks before coming under Ottoman rule in 1515. It had been fought over numerous times. The city is mentioned in ancient Egyptian documents, as well as the Hebrew Bible.

During the First wave of Jewish pioneers in the 1880s, when Jewish immigrants began arriving in the region in significant numbers, new neighborhoods were founded outside Jaffa on the current territory of Tel Aviv. The first was Neve Tzedek, founded in 1887 by Mizrahi Jews due to overcrowding in Jaffa and built on lands owned by Aharon Chelouche. In addition, other neighborhoods were built like Kerem HaTeimanim (1906), and others. Once Tel Aviv received city status in the 1920s, those neighborhoods joined the newly formed municipality, now becoming separated from Jaffa. Eventually it was the city of  Jaffa that was absorbed into Tel Aviv as another neighborhood. And now the city is officially called Tel Aviv-Jaffa. You can read more about Tel Aviv in this cool article that I’ve written. 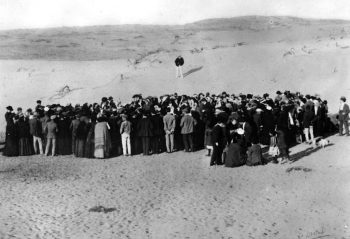 The Second Jewish wave of immigrants in 1904-1914 led to further expansion. In 1906, a group of Jews, among them residents of Jaffa, followed the initiative of Akiva Aryeh Weiss and banded together to form the Ahuzat Bayit (lit. “homestead”) society. One of the society’s goals was to form a “Hebrew urban centre in a healthy environment, planned according to the rules of aesthetics and modern hygiene.” The urban planning The first 60 plots were purchased Where Rothchild Boulevard is today, near Jaffa by Jacobus Kann, a Dutch citizen, who registered them in his name to circumvent the Turkish prohibition on Jewish land acquisition. Meir Dizengoff, later Tel Aviv’s first mayor, also joined the Ahuzat Bayit society. His vision for Tel Aviv involved peaceful co-existence with Arabs

Although founded in 1909 as a small settlement on the sand dunes north of Jaffa, Tel Aviv was envisaged as a future city from the start. Its founders hoped that in contrast to what they perceived as the squalid and unsanitary conditions of neighboring Arab towns, Tel Aviv was to be a clean and modern city, inspired by the European cities of Warsaw and Odessa. If would like some kind of an Israeli version of New York City.

THE MOMENT TEL AVIV WAS FOUNDED

On 11 April 1909, 66 Jewish families gathered on a desolate sand dune to parcel out the land by lottery using seashells. This gathering is considered the official date of the establishment of Tel Aviv. The lottery was organised by Akiva Aryeh Weiss, president of the building society. Weiss collected 120 sea shells on the beach, half of them white and half of them grey. The members’ names were written on the white shells and the plot numbers on the grey shells. A boy drew names from one box of shells and a girl drew plot numbers from the second box. A photographer, Abraham Soskin, documented the event. The first water well was later dug at this site, located on what is today Rothschild Boulevard, across from Dizengoff House. Within a year, Herzl, Ahad Ha’am, Yehuda Halevi, Lilienblum, and Rothschild streets were built; a water system was installed; and 66 houses (including some on six subdivided plots) were completed. At the end of Herzl Street, a plot was allocated for a new building for the Herzliya Hebrew High School, founded in Jaffa in 1906. The cornerstone for the building was laid on 28 July 1909. 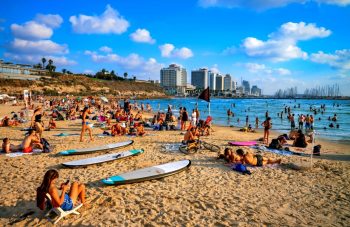 In short, Absolutely! Tel Aviv is mostly flat. Plus the distances are relatively small and apart from July-August, the weather is amazing. In addition, the city is safe, so you’re not likely to run into trouble exploring the city. I recommend using a pair of sneakers (or sandals if you’re visiting from April-September). In the summer months, you should have in reach a water bottle with you, as it gets very hot and quite humid.

Touring Tel Aviv with kids might be challenging. On one hand, you want to see what the city has to offer but keeping the kids engaged.

The Haganah Museum is dedicated to the story of the paramilitary organization that defended the Jewish community under the British Mandate!