A Little About the Arava Valley

From ancient times, important roads passed through the Arava Valley from the center of the country and from the Negev Desert to the Gulf of Eilat and across the Jordan to the east. According to the Bible, in the days of the Judges, it was ruled by the sons of Edom until it was conquered by King David. Then his son King Solomon established a port in Eilat and found copper in the Arava. When the kingdom separated, the Edomites returned and took control of the Arava Valley, until they were driven out by the Nabataeans.

At the beginning of the 2nd century, the Nabataeans took over the Arava and also built fortresses and guard stations there to secure the roads and the area. After the Arab conquest and the degeneration of the countries of the region, the Arava has also lost its importance almost to the present day.

In modern times the Arava Valley has diverse points of interest and many things to do. There are vast National Parks like Park Timna. A large section of the valley, containing ancient remnants of copper mining and ancient worship, is encompassed in a beautiful recreation park. Timna Valley is notable for its uncommon stone formations and sand. Water and wind erosion have created several unusual formations that are only found in similar climates. The Ramon International Airport is today in the Timna Valley.

The modern city of Eilat is considered the capital of the region. Eilat is a popular resort at the northern tip of the Red Sea. Eilat offers a wide range of accommodations, from hostels and luxury hotels to Bedouin hospitality. Eilat is located on the main migration route between Africa and Europe. International Birding & Research Center are in Eilat so you can do some cool Birdwatching.

Another attraction I would recommend visiting is the Samar Sand Dunes. the Sands of Samar are the last remaining sand dunes on Israel’s side of the Arava, constituting a unique and valuable habitat for desert-dwelling organisms. The Samar sand dunes were formed over thousands of years as grains of crumbled Nubian sandstone from the Timna valley were carried south and east toward the salt pan of Yotvata. Over time, weathering shaped the sands into stable dune formations. 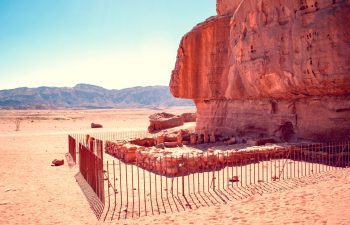 Human activity in the Arava Valley goes way back. For example in Timna Valley Cooper minds were found. Copper was the first metal used to create tools, weapons, housewares, luxury items, and worship vessels. Remains and evidence of the development of Copper mining and the production of Copper, at all stages, were discovered in Timna Valley. In the Timna Valley, flint tools were found in parking lots from the Pre-Ceramic Neolithic II period. It cannot be assumed that in the pre-Ceramic Neolithic period the knowledge necessary for the extraction of metallic copper from ores was already present. That is why in Timna they probably engaged in collecting “beautiful stones” for the production of ornaments during this period.

Next to the Copper minds, various places of worship were found. Some of them are prehistoric. The most impressive place of worship is a shrine to the goddess Hathor. The site was discovered near one of Solomon’s pillars. The earliest remains in it have been dated according to archaeological finds to the late Chalcolithic period, and it seems that until then it was not a sacred site. In the days of King Pharaoh Seti I a small temple for the goddess Hathor was built. But it was destroyed and rebuilt in the days of Ramesses II. Thousands of offerings were found in the temple courtyard.

The Arava as a Geological Window

The Arava Valley is a geological marvel. This is especially true if you’ll visit Timna Park. Because simply said Timna Park is a geological window in which various rocks containing minerals such as copper, iron, manganese, and more are exposed. In Timna valley, there are igneous rocks, terrestrial and marine sedimentary rocks, and alluvial sediments.

The Timna Valley is located at the northern end of the Arab-Novi Shield formed at the end of the Precambrian era. The processes of crystallization of magma in Timna have formed phaneritic plutonic rocks such as granite, Syenite, and Gabbro. The uplift of the area about 550 million years ago was accompanied by intense erosion, which exposed some of the ancient Igneous bedrock.

Now, this is only just the beginning of this amazing story of how the Timna Valley was formed. But if you want to hear the rest of it you’ll need to get in touch! I’ll tell you all about it! 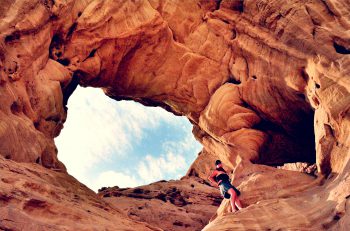 How Hot Does It Get ?

The Arava is one of the hottest and driest areas in Israel, every Israeli knows that. It has one of the lowest humidity in the country. The causes of the extremely arid climate in the Arava are its location in geographical latitude
Included in the world desert strip, its distance from the Mediterranean Sea and its topographic structure – a narrow strip and long, between mountainous hills, low relative to its surroundings. In the summer it can reach over 40°C

The Arava Valley A Geological Window that allows the visitor to see through millions of years. But first what is a tectonic window? So simply ...

Wildlife In The Arava Valley

In this post, we would get to know a little about the wildlife in the Arava Valley. Even Though the Arava is arid and there ...