The Modern Jewish Quarter is one of the four traditional quarters of the Old City of Jerusalem. What’s amazing is that there is evidence for Jewish settlement in the Jewish Quarter for a couple of millenniums. In fact, after the destruction of the Second Temple in 70 CE, a foreign population began to settle in Jerusalem, leaving a small Jewish community on the southern edge of Mount Zion.

After the Bar Kochba revolt in 135 CE, this community was also expelled and Aelia Capitolina was established on the ruins of Jerusalem. Throughout the Byzantine period, Jews were not allowed to live in the city. The Jews returned to Jerusalem only after it was conquered by the Muslims in 640 CE and again clung to Mount Zion.

In fact, for hundreds of years, the “Jewish Quarter” of Jerusalem was located on Mount Zion and on its eastern slopes, near King David’s Tomb and the Southern Wall. 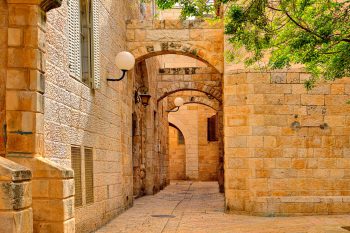 About 1,700 Jews remained in the Jewish Quarter when the British left the land on May 13, 1948, and only about 150 fighters, members of the Haganah, and the Irgun defended them. On the night of May 17-18, the Etzioni Brigade tried to break into the aid of the besieged in the Tower of David area but failed. On the night of May 18 to May 19, a divisional Palmach force under the command of David Elazar, was able to break through Zion Gate, followed by reinforcements, under the command of Mordechai Gazit (who was also for a short time commander of the quarter, until he was very badly wounded in battle), with about eighty soldiers of the Etzioni Brigade into the quarter. Contrary to the demand of the commander of the Jerusalem defense, David Shaltiel, the Palmach fighters left the gate. That morning, Jordan joined the battles in Jerusalem, and Jordanian Legion soldiers captured the Zion Gate and tightened the siege on the Jewish Quarter. The Tiferet Israel Synagogue, whose high dome served as the quarter’s defenders’ position, was captured at the beginning of the fighting and exploded. Over the next few days, the Jordanian Legion under the command of Abdullah el-Tell gradually occupied considerable parts of the district and imprisoned the residents in the area of ​​the four Sephardic synagogues. On May 27, after days of heavy fighting, the Arabs occupied the ruined synagogue and blew it up. Throughout the days of the fighting, Israeli forces tried to break into the quarter and help its men, but without success. During the entire period, 69 fighters and civilians were killed.

The Restoration of the Jewish Quarter

After the conquest of the Jewish Quarter, the Jordanians systematically demolished the buildings owned by the Jews who lived there. The high synagogues were blown up, and others became stables. Most of the dwellings in the district were destroyed during the war by Jordanian shells, and those that remained were used by Arab refugees from the west of the city, whose home was in the territory of the State of Israel. For example, the residents of the Arab village of Lifta, who lived at the entrance to Jerusalem from the west, were housed in the quarter. During the Jordanian rule, no restoration or construction work was carried out in the Jewish Quarter, and during these 19 years, until the Six-Day War, most of the abandoned Jewish Quarter houses collapsed and were destroyed.

Ironically, it was the destruction of the Jewish Quarter that enabled even its best restoration: the first years after the war were devoted to archaeological surveys and extensive rescue excavations, which would not have been possible if the quarter had been inhabited or built. Much thought has been invested in redesigning the district, as a residential area on the one hand, and as a tourist and archeological site on the other. In this way, only a few archeological finds are displayed “at the expense” of a construction area (such as the cardo or the broad wall) while above most of the finds houses were built (such as the Herodian Quarter, the Byzantine cardo, housed under residences and more).