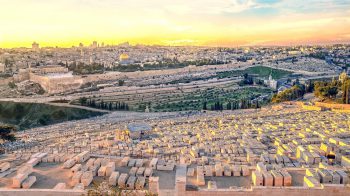 For 3,000 years, this land has been used as a Jewish cemetery and contains over 150,000 graves. For centuries, Jews would come to this area to retire and eventually die to be buried on the Mount of Olives and to ensure a quick resurrection at the End of Days. There are some graves so old on the Mount of Olives that any indication of who they were has long since faded away. Over time, space became limited, and only the most pious Jews who had contributed to the Jewish community are given permission to be buried there. When Jordan captured Jerusalem in 1948, the Jordanians laid waste to the cemetery and caused massive destruction. It wasn’t until Israel took back the land during the Six-Day War did it become revitalized. Israel went to great lengths to restore the land and become functional for burials once again.

It is believed that Jesus spent much time on the Mount of Olives teaching and prophesying to his disciples. Several important religious events occurred here. It is said that Jesus came here on the night of his betrayal, and it is where he ascended to heaven. By taking a tour of the Mount of Olives with me, I will give you comprehensive knowledge of this unique location. Plus, we can continue our tour by visiting the other famous sites nearby!