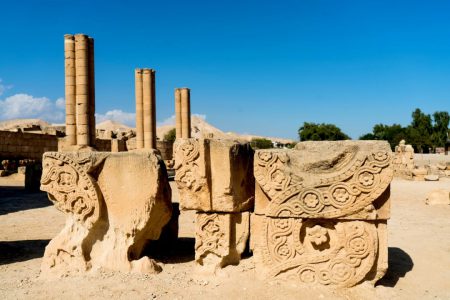 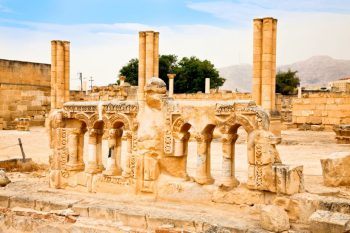 In the photographs above you can see the ruins of Hisham’s Palace which is the most archaeologically important Islamic monument in Palestine, and is a major attraction for both visitors and Palestinians.

As an archaeological site, Hisham’s Palace belongs to the category of desert castles. These are a collection of monuments dating to the Umayyad dynasty and found throughout Syria, Jordan, Israel, and the West Bank.

By 659, that district had come under the control of Mu’awiya, founder of the Umayyad dynasty. That year, an earthquake destroyed Jericho. A decade later, the pilgrim Arculf visited Jericho and found it in ruins, all its “miserable Canaanite” inhabitants now dispersed in shanty towns around the Dead Sea shore.

A palatial complex long attributed to the tenth Umayyad caliph, Hisham ibn Abd al-Malik (r. 724–743) and thus known as Hisham’s Palace. This “desert castle” or qasr was more likely built by Caliph Walid ibn Yazid (r. 743–744), who was assassinated before he could complete the construction. The remains of two mosques, a courtyard, mosaics, and other items can still be seen in situ today. The unfinished structure was largely destroyed in an earthquake in 747.

the oldest city in the world 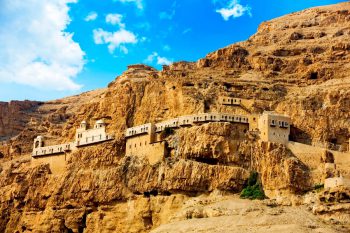 It is believed to be one of the oldest inhabited cities in the world and the city with the oldest known protective wall in the world. It has one of the oldest stone towers in the world as well. Archaeologists have unearthed the remains of more than 20 successive settlements in Jericho, the first of which dates back 11,000 years (9000 BCE), almost to the very beginning of the Holocene epoch of the Earth’s history. Copious springs in and around the city have attracted human habitation for thousands of years. Jericho is described in the Hebrew Bible as the “city of palm trees”.

The earliest excavated settlement was located at the present-day Tell es-Sultan (or Sultan’s Hill), a couple of kilometers from the current city. In both Arabic and Hebrew, tell means “mound” – consecutive layers of habitation built up a mound over time, as is common for ancient settlements in the Middle East and Anatolia.

Jericho has evidence of settlement dating back to 10,000 BCE.  The Ein es-Sultan spring at what would become Jericho was a popular camping ground for Natufian hunter-gatherer groups, who left a scattering of crescent-shaped microlith tools behind them. Around 9600 BCE, the droughts and cold of the had come to an end, making it possible for Natufian groups to extend the duration of their stay, eventually leading to year-round habitation and permanent settlement. In the photo below you can see the round stone tower mentioned above.

MONASTERY OF THE TEMPTATION

In the photograph above you can see the Monastery of the Temptation (also known as Deir Al Krntl). This ancient monastery was built on the slopes of the Mount of Temptation 350 meters above sea level, situated along a cliff overlooking the city of Jericho and the Jordan Valley.

In the Hellenistic priod a fortress built by the Seleucids called “Doq” stood at the summit of the mountain. It was captured by the Hasmoneans and it was here that Simon Maccabaeus was murdered by his son-in-law Ptolemy.

The earliest monastery was constructed by the Byzantines in the 6th century CE above the cave traditionally said to be that where Jesus spent forty days and forty nights fasting and meditating during the temptation of Satan. The monastery receives its name from the mountain which the early Christians referred to as the “Mount of the Temptation”. The Mount of Temptation was identified by Augusta Helena of Constantinople as one of the “holy sites” in her pilgrimage in 326 CE.

When the Crusaders conquered the area in 1099, they built two churches on the site: one in a cave halfway up the cliff and a second on the summit. They referred to the site as Mons Quarantana meaning forty, the number of days in the Gospel account of Jesus’s fast.

The land upon which the modern monastery was built was purchased by the Orthodox Church in 1874. In 1895, the monastery was constructed around a crude cave chapel that marks the stone where Jesus sat during his fast. 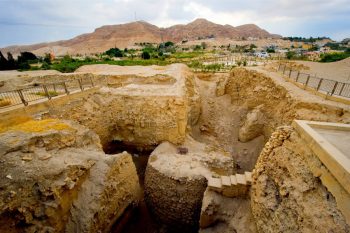