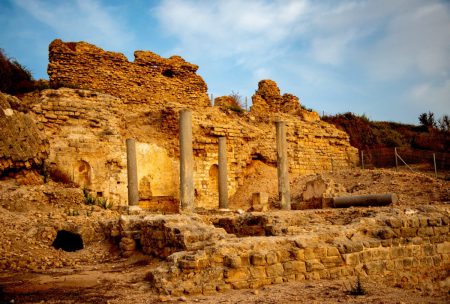 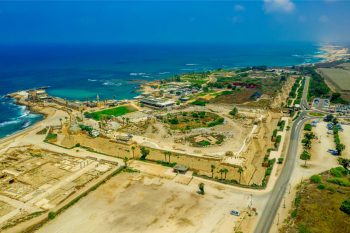 The Mediterranean coastline in Israel stretches for about 190 km. The coastline is mostly smooth and sandy, and in some places there are ridges near the coast.

Israel’s concave coastline cuts this system of ridges and depressions at a slight angle. Therefore, the shoreline in the north of the country has strips of uneroded shorelines, while the shorelines in the center of the shoreline are worn and form prominent shoreline cliffs. The length of this strip is fifty kilometers, and it is known as the “Sharon Slope”. The cliffs and ridges in it are the highest. The further south, the ridges are less clearly aligned and form uneven cliff sections, with large gaps between them.

The coast in the center and north, especially in the areas of the Western Galilee and the Carmel, are important sites for nesting turtles, especially the sea turtle (Caretta caretta). On the other hand, the migratory and semi-stable sand dunes serve as a habitat for diverse species, including a large number of reptile species.

Ancient Road of the Sea 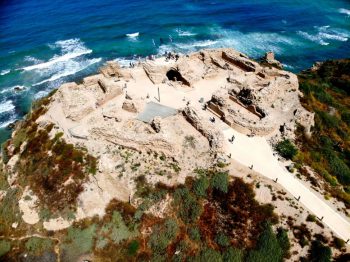 The Via Maris was an ancient trade route, dating from the early Bronze Age, linking Egypt with the northern empires of Syria, Anatolia and Mesopotamia. It is a historic road that runs in part along the Israeli Mediterranean coast. It was the most important route from Egypt to Syria (the Fertile Crescent) which followed the coastal plain before crossing over into the Jezreel Valley and the Jordan valley. Together with the King’s Highway, the Via Maris was one of the major trade routes connecting Egypt and the Levant with Anatolia and Mesopotamia.

A detailed description of the Via Maris and its various offshoots appears in the Papyrus  Anastasi I from the period of the New Kingdom in ancient Egypt dating to the 13th-14th centuries BCE. In Latin, The modern term Via Maris which means “way of the sea”, comes from the Latin translation of the Bible, the Vulgate that was translated by St. Jerome. It’s the translation of the Greek term found in Isaiah 9:1 of the Septuagint, the Greek translation of the Hebrew Bible dated mid 3rd century BCE.

In the photo above you have an aerial view of Apollonia National Park that lays on the shores of the Med Sea. Founded by the Phoenicians during the Persian period in the late sixth century BCE, it was inhabited continuously until the Crusader period. It fell to the Muslims in 640, and was fortified against Byzantine attacks and became known as Arsuf. In 1101 it was conquered by the Kingdom of Jerusalem, and was a strategically important stronghold in the Third Crusade, during which the Battle of Arsuf (1191) was fought nearby. The fortified city and the castle fell to the Mamluks in 1265, when both were completely destroyed.

Godfrey de Bouillon attempted to capture it, but failed for want of ships (William of Tyre, IX, x). King Baldwin I took it in 1102, after a siege by land and sea, allowing the inhabitants to withdraw to Ascalon. The Crusaders, who called it Arsur, rebuilt the city’s walls and created the Lordship of Arsur in the Kingdom of Jerusalem. In 1187 Arsuf was recaptured by the Muslims, but fell again to the Crusaders on 7 September 1191 after the Battle of Arsuf, fought between the forces of Richard I of England and Saladin. 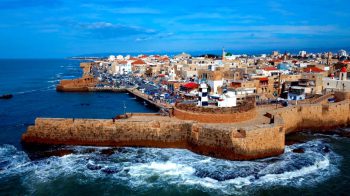