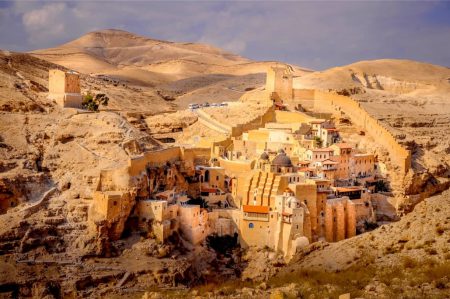 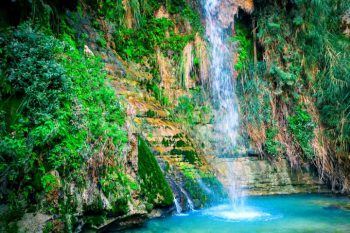 The Judaean Desert is a majestic piece of land. Each time I tour there I’m captivated by its unique beauty that is magnified ten times over when you recap in your mind all these biblical stories that took place right here.

The extreme terrain and climate conditions of the Judean Desert prevented permanent settlement there in ancient times. In contrast, these conditions were excellent for rebels and fugitives. For example in the Book of Samuel it is told that King Saul worried that David is trying to take his throne, Saul turns on David and tries to kill him, leading the latter to go on the run and operate as a fugitive for several years. Saul heads to Ein Gedi in pursuit of David and enters the cave where, as it happens, David and his supporters are hiding, “to attend to his needs”. David realises he has an opportunity to kill Saul, but this is not his intention: he secretly cuts off a corner of Saul’s robe, and when Saul has left the cave he comes out to pay homage to Saul as the king and to demonstrate, using the piece of robe, that he holds no malice towards Saul. The two are thus reconciled and Saul recognizes David as his successor.

Another known biblical reference is told in the Book of Kings narrating that when a drought hit the Land of Israel it were ravens that fed Elijah by the Brook Chorath identified in Wadi Qelt. Also John the Baptist lived in this desert wilderness until the day of his manifestation to Israel as the New Testament narrates.

Scripture from the Bible reveals in this desert wilderness one the most important victories in the life of Jesus is when He overcame temptation after his baptism by John the Baptist. Immediately the Spirit drove Him into the wilderness. And He was there in the wilderness forty days, tempted by Satan, and was with the wild beasts; and the angels ministered to Him (Mark 1:12-13).

in the Judaean Desert 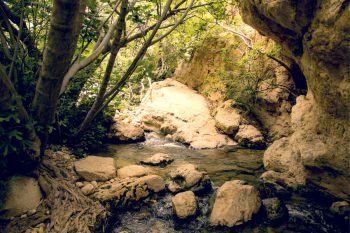 These monks had a political and spiritual influence and they were the ones who decided in the Christological struggle between the monophysical approach and the Chalcedonian approach in favor of the Chalcedonist approach. After the Muslim conquest, a nucleus of monasteries and monks remained in the desert, and so during the Crusades, with the help of the surviving monasteries, some of the monasteries that were destroyed or abandoned were re-established.

From Egypt came the idea of ​​the monastic movement to Gaza, the Judean Desert, Syria and Asia Minor. And from there the idea spread to the rest of the world of that time. Monks living in seclusion were in the Judean Desert as early as the 2nd century, but they were not incorporated as a monastic community. The writings “Life of Chariton” (Vita Charitonis) describe hermits who lived in the caves of Kalmon before the time of Chariton and Eusebius relates that Narcissus, the bishop of Jerusalem at the end of the 2nd century, retired to the desert due to plots connived against him. In order to read the entire article about Monasticism in the Judaean Desert, click here!

My Favorite Trails in the Desert

The Judaean Wilderness is one of the areas found in the Holy Land that magnetically draws me again and again to explore it. But some parks are more appealing that others, first because they offer more dramatic landscapes and picturesque scenery. Second bucease they hold natural springs that gush out of the mountains which offer some relief in the middle of the desert.

One park for sure worth exploring is Ein Gedi which lays on the eastern fringes of the Judaean Desert just next to the shores of the Dead Sea. This natural park is super popular among locales and tourists alike so try to get there early. Also better to explore Wadi Arugot that is less visited usually. But either trail you’ll choose to follow both have little pools of spring water you can jump into and little water falls you can stand under and cool off for a bit from the exhausting heat. You can read more about the park on my website.

Another park that everyone can tour with relative ease is Wadi Qelt. The wadi cuts through the Judaean Mountains has three perennial springs you can jump into and refresh a little from the long walk. you don’t have to the entire trail and there a couple of options to exit the nature reserve and track back. But make sure you have a car waiting for you to pick you up or you can track back the same trail you came.

St. George’s Monastery and the royal winter palace complex built by the Hasmoneans and Herod the Great are located in the Wadi, which has been identified with the biblical Perath mentioned in Jeremiah 13:5. The stream Chorath is mentioned in 1 Kings 17:3 as one of the hiding places of the prophet Elijah, has been identified by some with Wadi Kelt at St. George’s Monastery. A tradition holds that the parents of the Virgin Mary have prayed in Wadi Qelt to be blessed with a child. A Cave of St Anne, inhabited by hermits until a few decades ago, is connected to this tradition. 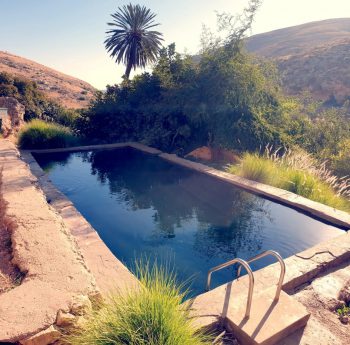